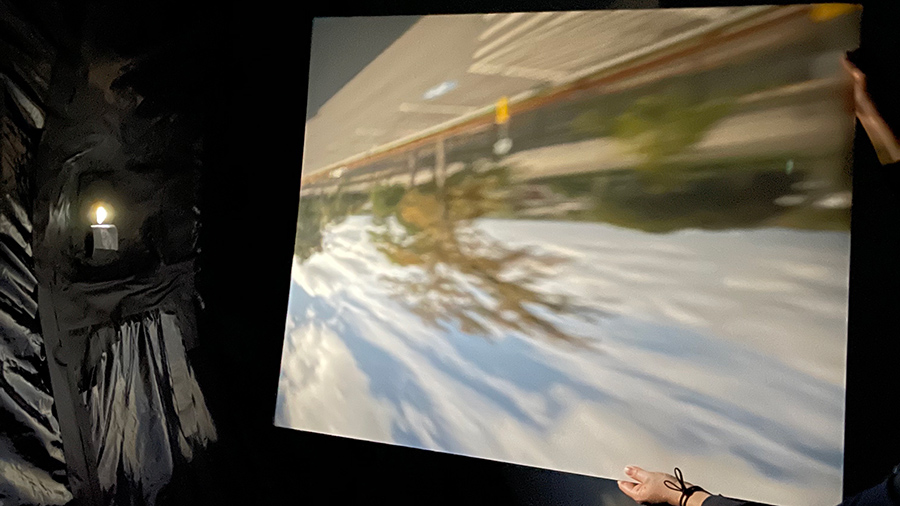 The Camera Obscura Room, an annex to the Amy H. Carberry Fine Arts Gallery on the campus of Springfield Technical Community College (STCC), was conceived and built by Sondra Peron, Associate Professor of Art and Special Cultural Programming and Gallery Coordinator, in her former gallery office, and with the help of many of her photography students.

In this camera obscura, you can see Pearl Street, in full color and motion. This should sound familiar since the same is true, in a basic way, to how your eyes work to see or how a camera works. Five minutes is recommended to allow your eyes some time to adjust and you can enjoy the full effect of this educational and entertaining experience.

What is a Camera Obscura In Latin, the term, “camera obscura” means literally “dark room.”The laws of optics dictate that light travels in straight lines and when rays of light reflect off objects outside a darkened room, some of those rays traveling through a small hole or aperture in a window, reform on the opposite wall; upside down & backwards!

This basic optical principle of light producing an image inside a dark room is first mentioned by Chinese philosophers in the 5th century BCE, later discussed by Aristotle (384-322 BCE), and in 1490 CE, Da Vinci gave an account of a camera obscura at work in his notebooks.

In the 17th and 18th century, artists like Vermeer used a camera obscura as a drawing aid, and the dark room was reduced in size to a portable black box. The image that could be witnessed in this smaller camera obscura box was fleeting until the beginning of the 19th century when Frenchman Louis Daguerre announced the first successful, permanent fixing of that image seen in the camera obscura on light-sensitive material in 1839. With that discovery, photography was born.

After nearly 175 years of subsequent advances to image-producing technology, we now carry cameras like those found in an iPhone with us everywhere, posting photographs on Facebook in nanoseconds.

The Camera Obscura Room is free and open to the public between September and May when the gallery is open and exhibitions are on view.

TAKE THE NEXT STEP