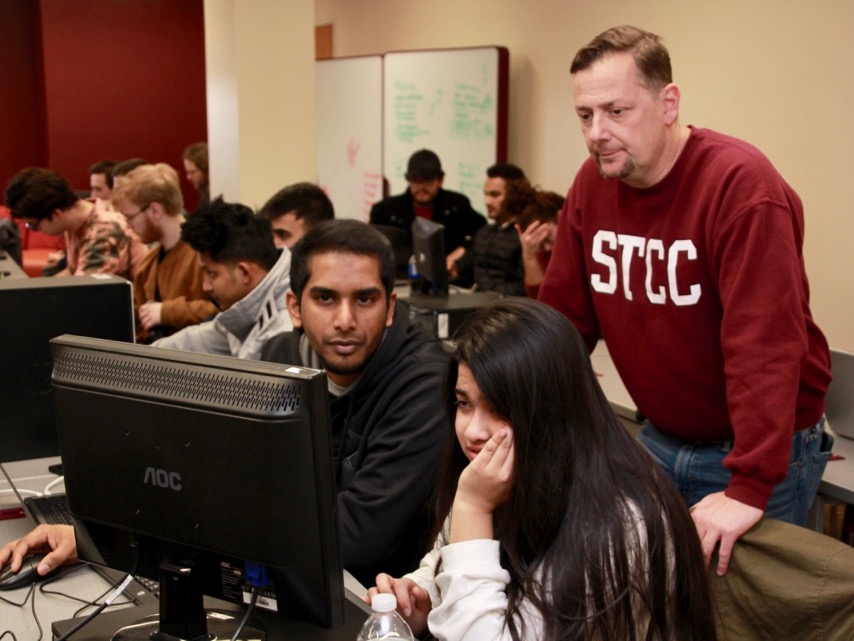 Student Mohamed “Mo” Arshad, of Springfield, arranged to bring in nine older computers from Willie Ross School for the Deaf in Longmeadow, where he works in information technology (IT). After the hard drives were wiped clean, Arshad and other students in December installed the UNIX operating system, which is free software that does not require a license.

“The main concern is to help people who are financially vulnerable, and help them get support for their education,” Arshad said.

Professor Brian Candido, chair of the Computer Information Technologies program, said he has asked his students over the past several years to repurpose computers as a final project in the class. Some of the equipment is not very old and can be of use to students at STCC.

“But it’s obsolete for the company that has it. For us, it can have a second life for a low-income family,” Candido said. “In the past, these re-imagined computers have been invaluable to the recipients and at times have made a difference in their degree completions.”

Candido said he plans to deliver the computers to the Center for Access Services (CAS) at STCC, which provides a range of support services for students facing hardships.

As one of the most affordable higher education institutions in the region, STCC offers many services and tools for students to use at no charge.

“It’s a win-win. It’s a win for our students and a win for the companies. We take the computers off their hands. They’d have to pay to get the equipment removed,” Candido said.

Bonnie Katusich, director of operations at the Willie Ross School for the Deaf, said the school was thrilled to help the students in need and praised “Mo” Arshad for his efforts in getting the equipment to STCC.

“Technology changes quickly, and we as a school try to recycle or repurpose equipment effectively when we can,” said Katusich. “Many times there is a fee for such recycling. This time, it feels like we are able to ‘pay it forward’ thanks to Mo.”

One of the students working on the project added Urdu, the official language of Pakistan, to the operating system. Users can choose English or Urdu on the computer. “My grandmother would prefer it in her own language. She would understand it,” said STCC student Syeda Salman, of Indian Orchard. “I thought maybe there were other people like that.”

Another student, Sean Hundley, of Brimfield, said the computers might inspire students who receive them to consider careers in IT.

“I think it’s great for them not only to have computers, but to give them exposure to an alternative operating system that they can experiment with themselves,” Hundley said. “There’s a lot of opportunities in IT in general. You never know what people will develop out of this, what they will get out of it, and what it will become in the future.”

Founded in 1967 and located on 35 acres of the Springfield Armory National Historic Site, STCC is a major resource for the economic vitality of Western Massachusetts. As the only technical community college in Massachusetts, STCC offers a variety of career programs unequalled in the state. STCC’s highly regarded transfer programs in business, advanced manufacturing, healthcare, liberal arts, and STEM fields continue to provide the most affordable options for students pursuing a four-year degree. With an annual enrollment of about 7,000 day, evening, weekend, and online students, STCC is a vibrant campus rich in diversity.