SPRINGFIELD, Mass. – The Springfield Technical Community College Foundation is pleased to announce it accepted two generous donations – filament for 3D printing and a monetary gift of $1,000 – that will boost the Mechanical Engineering Technology and Robotics programs at the college.

Twenty rolls of filament for 3D printing in a variety of colors were donated by the Western Massachusetts Chapter of the National Tooling and Machining Association (WMNTMA), an organization that promotes the precision manufacturing industry. Students in the Mechanical Engineering Technology Program will use the filament. 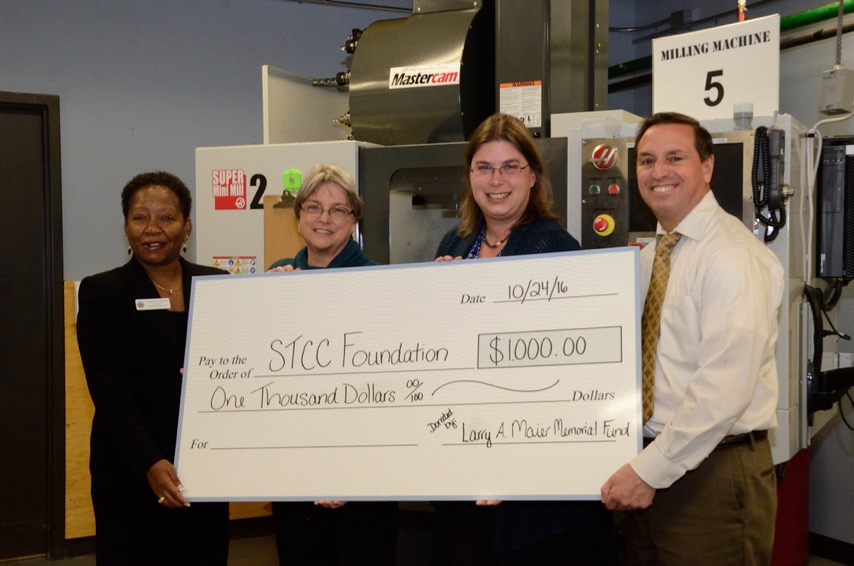 The Larry A. Maier Memorial Fund, named for the late owner of Peerless Precision in Westfield, donated a $1,000 check, which will be split between Mechanical Engineering Technology and Robotics.

During his lifetime, Larry Maier was very involved with the WMNTMA and worked to make sure the younger generation received a proper education to pursue a career in precision manufacturing, according to his daughter, Kristin Carlson, vice president of the Board of Directors of the WMNTMA and president of Peerless Precision.

When he passed away in 2012, my aunt suggested we start a scholarship fund in his name to keep that legacy going. We started the ‘Larry Fund’ in October 2012. The Board of Directors at NTMA was completely behind it. Kristin Carlson President of Peerless Precision

“When he passed away in 2012, my aunt suggested we start a scholarship fund in his name to keep that legacy going. We started the ‘Larry Fund’ in October 2012. The Board of Directors at NTMA was completely behind it,” Carlson said.

Each year, the WMNTMA holds a Pig Roast to raise money for the Larry A. Maier Memorial Fund. The $1,000 monetary gift being donated to the STCC Foundation was raised at the roast, which was started by Maier.

Carlson said a colleague brought to this year’s roast 20 rolls of leftover filament for 3D printing that was taking up space at his house.

“He said I’d like to donate this to the Larry Maier Fund and the NTMA, and I’d like you to find a good home for it,” Carlson said.

Steve Grande, president of the WMNTMA and a member of the STCC Board of Trustees, said he welcomes the donations.

“I think it’s terrific. We need to support every effort in the region to develop our workforce. STCC does a terrific job at that,” Grande said. “This gives them an opportunity to get materials free of charge. With state money being short, I think every little bit helps.”

Professor Gary J. Masciadrelli, department chair of Mechanical Engineering Technology at STCC, said, "This donation helps the department financially, as the cost of this material is expensive and we tend to use quite a bit.”

Dr. Adrienne Smith, dean of the School of Engineering Technologies and Mathematics, added, “We’re always in need of more materials, which can be very costly.”

Founded in 1967 and located on 35 acres of the Springfield Armory National Historic Site, STCC is a major resource for the economic vitality of Western Massachusetts. As the only technical community college in Massachusetts, STCC, an Achieving the Dream Leader College, offers a variety of career programs unequalled in the state. STCC’s highly regarded transfer programs in business, engineering, liberal arts, science and technology continue to provide the most economical options for students pursuing a four-year degree. With an annual enrollment of more than 8,500 day, evening, weekend and online students, STCC is a vibrant campus rich in diversity.