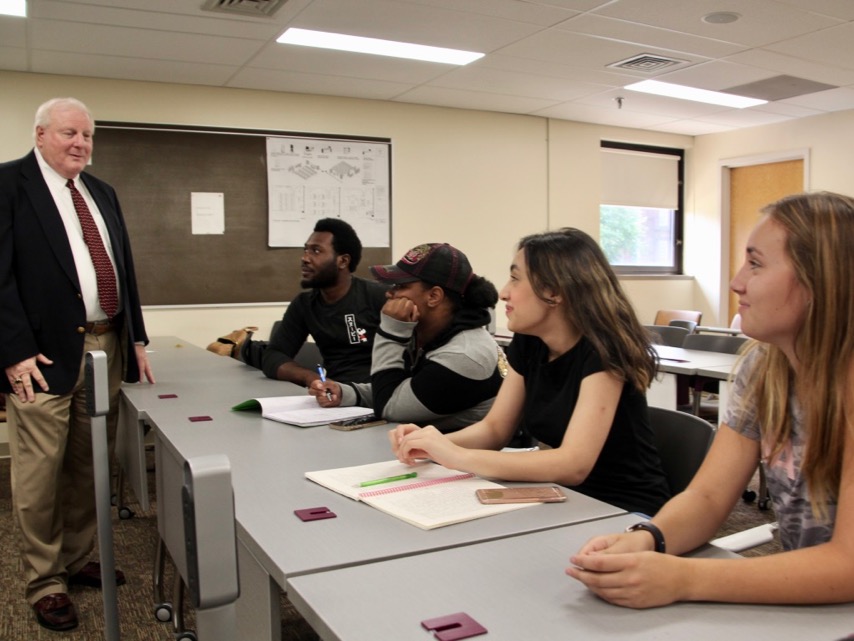 Professor John Guerra talks with students in his abnormal psychology class. They are, from left, Keon Wedderburn, Samaiyah Gray, Manar Hamied, all of Springfield, and Kamryn Kozaczka, of Ludlow.

SPRINGFIELD, Mass. – When John Guerra started working as a psychology professor at Springfield Technical Community College in 1977, most of his students were young veterans about his age who had recently returned from the Vietnam War.

He would use his training as a psychologist not only to teach material from the textbook, but to help his students overcome their post-war demons.

“A lot of them were angry, angry at the country for putting them over there,” Guerra said. “I won’t even tell you the stories they told me that they had to experience in Vietnam. They were lucky to be alive.”

Forty-two years later, Guerra still teaches psychology classes and continues to lend a sympathetic ear to students – many of whom weren’t even born when he began teaching at STCC.

These days, he might hear from students who are young working parents. They want advice about a child who might have autism or attention deficit disorder. He sometimes learns that a student is homeless and hungry. Others might ask him what their dreams mean.

“Our kids here are always coming up and asking, ‘Can you help me out?’” Guerra said.

Guerra does what he can. He might refer a homeless student to STCC’s Center for Access Services, which provides free help to eligible students in need of groceries, housing and other necessities. Guerra might direct them to the Health and Wellness Center at the college.

“I’m glad I can use my experience to help them better themselves,” said Guerra, who has worked as a clinical therapist in Springfield for the past 20 years while also teaching classes at STCC.

Guerra – a longtime adjunct (part-time) professor at STCC – brings a joy and passion to his work. He joined STCC when the college was 10 years old and has served under five of the college’s six presidents. He shows no signs of stopping.

This is home for me. I’ve been offered jobs at other colleges, but I’m not interested. This is a good school. They do a good service for the kids. John Guerra, STCC psychology professor since 1977

Guerra has made a meaningful difference in the lives of generations of students, from veterans to working parents to senior citizens. He recently had a 92-year-old retiree for a student. Former students approach him on the street to say hello and recall their experience in his classroom.

"It is true John has worked for decades at STCC, but it is impossible to quantify the impact he has had on students,” STCC President John B. Cook said. “Not only does he give everything to the craft of teaching, he is a tremendous human being."

A big booster of the community college, Guerra grew up in Springfield and earned his bachelor’s and master’s degrees in psychology from American International College. He lives in Longmeadow and worked in Springfield and Chicopee public schools before coming to STCC.

“This is home for me,” Guerra said. “I’ve been offered jobs at other colleges, but I’m not interested. This is a good school. They do a good service for the kids.

“I think you’re foolish not to spend two years here,” he added. “You’re going to save a ton of money. You’re not going to go to another college in Springfield for what you’re paying here, and we’re not teaching you anything different than what they’re teaching. You’ve got great professors who are knowledgeable in their field. Many of us were in businesses before taking teaching positions, so we’re bringing that experience. A lot of the professors here are lawyers or taught in public schools, so you have a great staff.”

Richard Greco, dean of Liberal Arts and Professional Studies at STCC, said one of Guerra’s strengths as a professor is his professional background as a clinical psychologist.

“Professor Guerra brings a virtually infinite amount of clinical experience to the classroom that our students benefit greatly from,” Greco said. “This practical application of knowledge is a cornerstone of a technical education even within the liberal arts.”

Guerra’s students say they enjoy hearing their professor relate stories about real people he has treated over the years.

“I like how he brings examples from his practice into the class to help us better understand the disorders we’re talking about,” said Kamryn Kozaczka, a student from Ludlow.

Kozaczka started as a criminal justice major, but switched to psychology. Over the summer, she took Guerra’s abnormal psychology class.

Another student in the class, Agnes Frias, of Springfield, described Guerra as an engaging professor who has a way of making students feel comfortable opening up.

“Some people will go after to talk to him, but others will share in class,” she said.

Frias said she appreciates the insight Guerra brings into the classroom.  “If we’re going over the topic of depression, he will have more ways to explain and go deeper than the book,” Frias said. “He will give an example of the way a person is acting. He will ask us what do we believe they have and how do we treat them if we were the doctor. It’s a fun way of learning.”

Students say Guerra also helps them decide how to turn a psychology degree into a career. Guerra highlights the partnership between STCC and the College of Our Lady of the Elms. Students can enroll in a program and receive a bachelor’s degree in social work from Elms on the STCC campus.

“They always ask, should I take this, or should I take that?” Guerra said. “I tell them, if you’re going to go to college, make it worth something down the road. There are hobbies and then there are actual careers. If you can’t make money through your hobby, then have a career. The Elms social work program is excellent. Jobs start in the $50,000 range.”

After 42 years at STCC, Guerra has reached the age where he can retire and enjoy his own hobbies. But he’s not ready to give up the work he loves.

Founded in 1967 and located on 35 acres of the Springfield Armory National Historic Site, STCC is a major resource for the economic vitality of Western Massachusetts. As the only technical community college in Massachusetts, STCC, a designated Hispanic Serving Institution, offers a variety of career programs unequalled in the state. STCC’s highly regarded transfer programs in business, engineering, liberal arts, science and technology continue to provide the most economical options for students pursuing a four-year degree. With an annual enrollment of about 7,000 day, evening, weekend and online students, STCC is a vibrant campus rich in diversity.